The Secrets of a Director Unfold in 'Counselor' 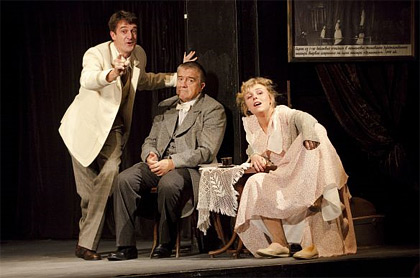 Every production by a good director is something of a confession. Even so, on rare occasion a show comes along that is a director's particularly intimate, yet very public, statement about matters of profound personal concern.

In recent years, I have seen this phenomenon in Mark Zakharov's “The Executioner's Lament“ at the Lenkom Theater and Kama Ginkas' “Rothschild's Fiddle“ at the Theater Yunogo Zritelya. To them I would now add Mikhail Levitin's production of “The Secret Notes of a Secret Counselor“ at the Hermitage Theater.

“Secret Notes” is a dramatization of Anton Chekhov's novella, „A Boring Story.” Levitin, however, is an eccentric artist who loves to play with chaos. It is no surprise, therefore, that he sews phrases from the play, „The Seagull,” and a chunk from the short story, „Enemies,” into the fabric of his show.

The tale that he tells is of a renowned and aging medical professor. It is bad enough that the doctor feels death looming, but every bit as aggravating is that he is wracked by a loss of interest in almost everything to do with the human experience. Students, colleagues, loved ones — all disappoint him with their petty requests and their lack of wits.

The professor is no easier on himself. He knows his balding head, his mouth full of false teeth and the nervous tick that attacks him in moments of stress are signs that he is barely a shadow of what he once was. All that remains is his belief in science — “Science is love,“ he declares at one point.

Theater, however, as always in a Levitin production, is also a major topic of digressive discourse. It is something that the professor doesn't love or understand, although he cannot escape it, either.

To play the role of Professor Nikolai Stepanovich, Levitin invited Mikhail Filippov to take a break from his schedule at the Mayakovsky Theater and join the company of this show. Filippov is a revelation as the dignified, intelligent but tortured man.

There is a moment at the show's end that flashes light on everything that has preceded it, including the nature of Filippov's performance.

Alone in a hotel room, far from all that means anything to him, Nikolai Stepanovich admits that never before was he “able to make peace with the slowness of time” as he is now. „The last few months, as I have waited for death, seem to have lasted longer than my entire life,” he declares.

The slowness of time, the interminable waiting, and the sense of quiet and stillness that accompany them, are what inform Filippov's interpretation of the doctor. Aside from some brief emotional explosions, the actor keeps his character under control at all times, speaking in a hushed voice, moving about the stage with excruciatingly slow deliberation, and revealing his innermost thoughts through his eyes and facial expressions.

The aging doctor is surrounded by many who want much from him — or so he concludes — although some have his best interests at heart.

His porter Nikolai (Yury Amigo) is one of those whose lives are centered on serving someone greater. He carries the famous man's umbrella, brings him water during lectures and occasionally speaks Latin as proof that he is deserving of his master.

But it is Katya, the young daughter of Nikolai Stepanovich's late friend, who is truly the doctor's last link to life. She has been his ward for years and their friendship is so deep that both surely suspect that they may be in love.

As performed by Olga Levitina, Katya is both tender and demanding with her benefactor. Her interest in theater and art is met with his indifference to the topic, although that only brings them closer, to the jealousy of his wife Varya (Darya Belousova) and daughter Liza (Lyudmila Kolesnikova).

Levitin repeatedly inserts ruminations on the nature of theater — its clumsiness, its failures and its lofty aspirations — into this work about life slowly giving way to death.

Are there too many of these digressions? Probably. Do they often undercut the main story? Yes. Would it be a Levitin production without them? No.

“The Secret Notes of a Secret Counselor“ is at times exquisite and at times maddening. But by the time that it is over, you feel as though you have been privy to a secret confession. And there is solemnity and magic in that.